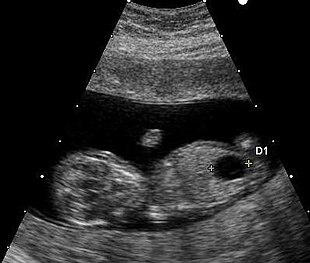 Ultrasound of fetus with Down syndrome showing a large bladder

Down syndrome is a congenital anomaly or a birth defect in which babies are born with extra genetic material from chromosome 21. The extra chromosome is sometimes present with other problems including mild to moderate intellectual disabilities, characteristic facial features, and health concerns such as heart defects. The severity of this congenital anomaly varies greatly from child to child. Trisomy 21 is the most common type of Down syndrome, occurring in about 95 percent of cases.

Down syndrome is a congenital anomaly which can affect a child physically, cognitively, and behaviorally. Remember that every child with the condition is unique and may present with these characteristics to different degrees or not at all. A child with Down syndrome as birth defect will have some, but perhaps not all, of the following features: